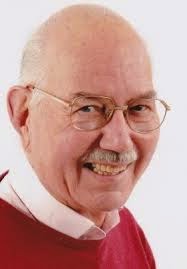 I first met Vincent Nolan some forty years ago. He came to teach Synectics to a group of us at Garland-Compton (shortly before it morphed into Saatchi and Saatchi). I was in my late twenties and had risen quickly in the advertising business, but learning from Vincent undoubtedly transformed my life.


It dawned on me that one of my main skills up to that point was in identifying weaknesses in other people’s thinking and wielding the scalpel, and that this approach, while it had helped me to be successful, was of very limited value in promoting real creativity and innovation (the lifeblood of marketing communications). Vincent taught us that a better approach was first to articulate the value in emerging ideas, then going on to identify the key issues and problem-solve them.


This may seem simple, even obvious, but it required some complete personal rewiring in myself, changes that have lived at the heart of my life and work ever since.


Following that early encounter, I brought Vincent into each successive new role I found myself in – training my new teams in the whole Synectics bag of tricks. Perhaps most powerfully this was achieved at Lintas in Sydney, where, in a succession of visits from him, most colleagues in the agency were given the treatment. This was a major factor in enabling us to work together more effectively and creatively – and as a consequence we were able to rise from eighth in the local league table to second in just five years, quadrupling profits in the process.


Eventually I joined Synectics myself, as Vincent gradually wound down his life's work, concentrating more on his cello and his golf.

Standing up for Jonas

It’s not every day that opera house orchestras get to emerge, blinking, into the light above ground level. But that’s what happened to the Australian Opera and Ballet Orchestra this last week as they appeared with the German tenor, Jonas Kaufmann, in the concert hall of the Sydney Opera House.


I say ‘appeared with’ because although the audience had come to hear the Great Divo, the orchestra occupied half the programme without him, playing splendidly – overtures to I vespri siciliani and La forza del destino, intermezzos from Manon Lescaut, I Pagliacci and Cavalleria rusticana, the Bacchanale from Samson et Delila and the winsome Meditation from Thaïs (lovely solo from concertmaster Laura Hamilton).


Daughter Dora, possibly to be provocative, said she enjoyed their pieces most in the concert.


Of course, Jonas was there too, in excellent voice, providing clear evidence of why he has emerged as the leading tenor of our day – voice bright with a baritonal tinge, together with an unusually total command to the Italian and French styles, as well as his native Austro-German.


The audience bayed its approval, the standing ovation lasting some twenty-five minutes and interrupted by four gratefully received encores, the final one rendered in German, then English – ‘You are my heart’s delight’.


We had tickets for this take-out-a-mortgage event courtesy of our two New Best Friends in Sydney, to whom grateful thanks.
Posted by Roger Neill at 02:01 1 comment:

Peace and tranquillity in Singapore 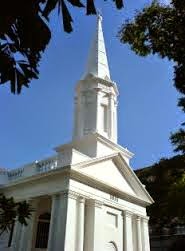 In Singapore with Sophie and Dora, we visit the Armenian Church. It was the first Christian church to be built in Singapore, in 1835, the architect Irishman George Coleman.


I love it dearly and have visited it most times I’ve been in the city over a thirty-plus year period. Even in the prevailing high temperature and humidity, it remains a haven of peace and tranquillity.


Yesterday we visited the Asian Civilisations Museum, and explored an exhibition of early colonial life, but I saw no mention there of the extraordinary contribution of the local Armenian community to the growth and development of life in Singapore.
Raffles Hotel and The Straits Times are just two of their surviving legacies.
Posted by Roger Neill at 06:53 2 comments:

Pictures of the mind 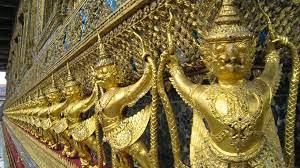 It’s not just the ubiquitous selfie. People nowadays take photographs – what we used to call ‘snaps’ – anywhere and everywhere, ceaselessly.


I don’t do this at all. It’s just one more way in which I’ve become more disconnected from contemporary culture.


It reminds me of my first visit, some three decades ago, to the extraordinary Grand Palace in Bangkok. I hitched on to a tour group, mostly Americans, who were snapping away happily while their tour guide talked the talk.


A woman in the group came up to me with puzzling eyes: ‘You’re not taking pictures. Would you like to borrow my other camera?’


‘Thanks for the offer, but I’m fine,’ I responded.


Clearly unconvinced, she retreated, and it was not until towards the end of the tour that she came back to me: ‘I think I get it,’ she said. ‘Pictures of the mind.’
Posted by Roger Neill at 06:34 1 comment:

We will remember them... 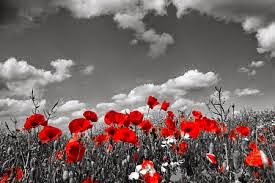 On Sunday, the day before the centenary of the start of the First World War, the vicar of our local parish church in King’s Sutton, Father Roger Bellamy, orchestrated a special remembrance event ‒ a mix of words and music.


He asked me to read three of the poems – two by Wilfred Owen, ‘From My Diary, July 1914’ and the wonderful ‘Strange Meeting’, and a third by Laurence Binyon, the one that has this as its fourth verse:


They shall grow not old, as we that are left grow old:
Age shall not weary them, nor the years condemn.
At the going down of the sun and in the morning
We will remember them.


The fact that these words have been repeated thousands of times around the world does nothing to reduce their simplicity and their power.
Our village lost twenty-two men in that conflict and on Monday the church bell tolled 'at the going down of the sun' for each of them.
Posted by Roger Neill at 08:12 1 comment:

Birmingham vs Paris: the bottom line

My colleague David Walker had been working in both Birmingham and Paris. He spends a lot of his life at airports.
‘Paris is so elegant,’ he told me, ‘but the people – so rude.’
‘How about Birmingham?’ I asked him.
‘Well, it’s completely the opposite,’ he said. ‘The Brummies ‒ so warm and friendly. A delight. But the place itself – nothing to write home about.’
‘Here’s an idea,’ I proposed: ‘What if we were to switch the populations over?’
‘Oh, God no. Those Brummies in Paris? They’d immediately start double-glazing everything and building conservatory extensions.’
Posted by Roger Neill at 10:19 1 comment: