Get started then start learning 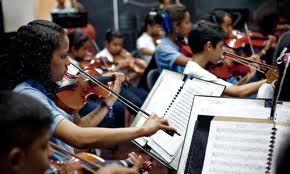 Last week I did a sort of lecture at City University London for the students on their Masters in Innovation, Creativity and Leadership degree course. I was founding director there of the Centre for Creativity – and the MICL (as in “Taking the MICL”) was and is the best fruit from that time.


In reality the “lecture” took the form of a conversation between Marshall Marcus and myself (and the students), and Marshall talked about El Sistema, the project in Venezuela where kids from all backgrounds get involved in playing music in orchestras.


In Venezuela there are now 400,000 children participating, and there are El Sistema-style projects flowering around the world.


“Usually, kids who start to play instruments first spend several years learning before they think about joining an orchestra,” said Marshall. “But in El Sistema they join an orchestra at the beginning and, through that involvement, start the journey of learning how to play.”


How many other areas could that thinking be applied to?
Posted by Roger Neill at 09:58 No comments: 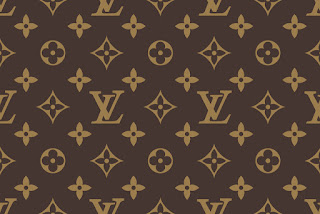 I was facilitating a workshop with a group of Louis Vuitton managers and we were exploring together what works well and what does not in the company.


In an organisation that they were generally thrilled to be part of, top of the “what doesn’t work well here” list was communication. “Nobody tells you anything around here,” said one. “I always seem to be the last to know,” said another.


Then we did some sorting of the team into personality types and, surprise-surprise, none of them were “bards”. None saw themselves as strong communicators and none saw any of their colleagues as effective in that area.


Eureka! They all seemed to grasp at the same moment that the problem was not them, but us. And, actually, not us but ME.


So what to do about it? The first solution usually proposed in this situation is to develop a new internal newsletter. It’s never the answer.


A few of the Louis Vuitton people decided that they could and would change their behaviour. And others decided to start hiring people who were strong bards. 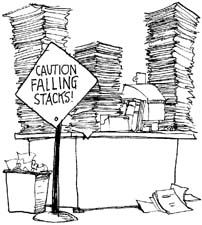 “According to an expert,” reports the Daily Telegraph, “having a cluttered environment reflects a cluttered mind,” and what’s more, “the act of tidying up can help you be more successful.”


At least, that’s the gist of it. It’s a lengthy piece. The “expert” is Ms Jayne Morris, a “resident life coach for NHS Online.”


Does that mean that we taxpayers are funding her wisdom?


My own experience as an “expert” suggests that the clean desk betokens the empty mind. Do you suppose I’ll be featured in the Telegraph any time soon?


Yesterday I went walkabout in the leafy inner-city suburb of St John’s Wood ‒ in search of the homes of artistic Aussies and New Zealanders who came to better themselves (or so they imagined) in fin-de-siècle London.


It’s an area that young Australasian artists, writers and musicians could probably only consider walking through nowadays, perhaps to a cricket match, property values having rocketed there during the twentieth century. Australasians have traditionally lived in close proximity in London in order to network with each other. In the mid-twentieth century, it was primarily in Earl’s Court (or “Kangaroo Valley” as it came to be known). More recently the suburbs of choice have been more diffusely spread across west London – from Neasden to Clapham ‒ the need perhaps substantially replaced now by Facebook.

Throughout the nineteenth century St John’s Wood attracted the artistic, notable inhabitants including the writers George Eliot and George du Maurier, fashionable artists Sir Edwin Landseer, Laurence Alma-Tadema and James Jacques Joseph Tissot, composers William Sterndale Bennett and William Wallace, with singers including Manuel Garcia II and his sister Maria Malibran. Through the late eighteenth and early nineteenth centuries it was a convenient place for mistresses and courtesans, including Mrs Fitzherbert, wife of the Prince Regent, and Jane Belmont, mistress of George IV.


The suburb had sufficient social and/or political clout by the end of the nineteenth century that the Great Central Railway was forced, at great expense, to tunnel its way south from the Finchley Road to its new London terminus, Marylebone Station, leaving the leafy charms of St John’s Wood untouched.


Whose homes did I find?


Much the most exciting was the discovery that 87a Clifton Hill, where the Australian sculptor Bertram Mackennal (later Sir Bertram, he was the first Australian artist to be knighted) lived and worked with his family for ten years from 1894, is not on the road, but set back behind No 87 down an alleyway ‒ a real studio house. I rang the bell, but nobody was home, so I’ll have to go back another time to see if I can get a look around. Just three doors away was the studio of another important sculptor, Sir William Reid Dick. For some reason Reid Dick has a Blue Plaque, while Mackennal has none. In 1904 Mackennal moved a short distance to more salubrious accommodation in Marlborough Hill.


At 10 Hill Road lived Arthur Streeton and his new wife, the Canadian violinist Nora Clench, a house which “though ordinary-looking outside, is delightfully artistic inside,” according to the Sydney Morning Herald in 1910.


It seems that Durham House in Langford Place, the home of the great contralto Ada Crossley, has been demolished, but, judging by others in the street, it must have been a fine property, a magnet for visiting Australians.


A pair of brothers from Wellington, Arnold and Garnet Trowell (cellist and violinist respectively), lived with their parents at 52 Carlton Hill. While Arnold became a leading player in his generation, both brothers are best remembered now as beloved by another young New Zealander, Katherine Mansfield, who was to become perhaps the greatest writer of short stories in English in the twentieth century. Katherine became infatuated with Arnold first, then, when he did not reciprocate, with Garnet, with whom she became pregnant in 1908/09. She lived with the Garnets for a while in Carlton Hill.


On the edge of St John’s Wood at 11 Boundary Road, with what must have been fine country views to the north, lived the Australian portrait photographer, H Walter Barnett. He moved to set up in London (from Sydney) in 1898, where he quickly established himself as a leader in the field, Australia’s first world-class photographer.

The urgent drives out the important 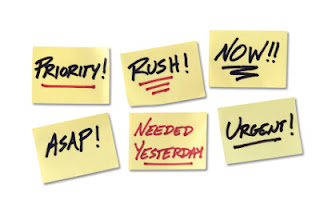 A major issue for us all in managing our time is that the urgent always seems to win out over the important.


It’s quite clear that the things in one’s to-do list that are both urgent and important get first call on our time. It’s at the next level down that the problems lie.


What to do about it?


If we have people who report to us, I’ve no doubt that the urgent-but-not-so-important jobs need to be speedily delegated, so that we can focus on the important-but-not-so-urgent stuff.


If we don’t do this, we spend our working lives fire-fighting. A recipe for failure.
Posted by Roger Neill at 08:14 1 comment: 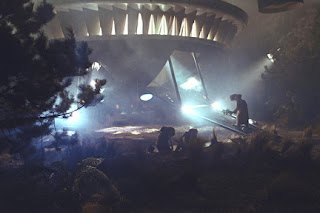 Interesting to note which of all my past blogposts have been visited most in the past month as a result of Google searches:


Who’d have thought it?
Posted by Roger Neill at 09:19 No comments:

Email ThisBlogThis!Share to TwitterShare to FacebookShare to Pinterest
Labels: After Eight, Experiment on a Bird, ideas, innovation funnel

Waiting for the right moment 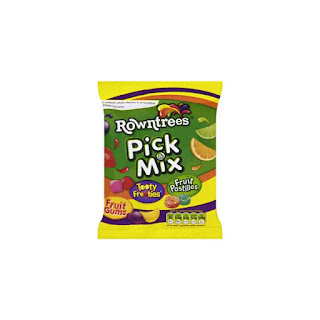 I was shopping yesterday in the supermarket and, walking down the confectionery isle, looking for what my ten year old might enjoy, I stopped dead in front of a fairly recent new product ‒ Rowntree’s Pick & Mix.

It’s not that it’s such a radical innovation. In fact it’s a perfectly obvious one, given that the company produces Fruit Gums, Fruit Pastilles, Jellytots, Tooty Frooties etc.


The reason that I stopped in my tracks was the realisation that this was an idea that I’d vigorously proposed to the company nearly forty years ago. I thought it was a no-brainer then. But they didn’t.


Were they right? I doubt it. By now they could have had four decades-worth of building a decent brand, with all the attendant sales and profit.


The company didn’t seem to have marked Erica Jong’s invocation:


And the trouble is, if you don’t risk anything, you risk even more.

The Joy of Masterclasses 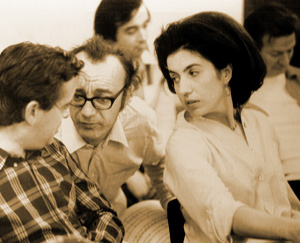 I’ve been thinking about the important role that masterclasses have played in my life.


The first I ever attended was in 1973 (and, yes, that’s forty years ago), where the eminent pianist Alfred Brendel worked with half a dozen young musicians, helping them to re-think the way they approached and played Haydn, Beethoven and Schubert. In fact that was the first of a series of six classes I went to that week, each three hours long and conducted by Brendel.


But, aside from the effect on the students, Brendel enabled me personally, just one of the audience, not only to open my ears to music in new ways, but also to think about how teaching works – what enables change and what creates barriers. Much of that has stayed with me ever since.


What prompted these reflections was the all-Schubert concert given by Imogen Cooper in the Auditorium of St John’s College, Oxford, on Saturday, the first fruit of her new appointment as Humanitas Visiting Professor.


What a fine player she has become since being one of those six budding young pianists four decades ago.

“I learned it from a book,” announces Manuel, hidden behind the moose’s head that is for some reason on the reception desk at Fawlty Towers.


“Did you? Did you really?” responds the Major, impressed.


I read books all the time, but most of the really useful stuff that I’ve learned in life simply cannot be learned from them.


How to be creative, for example, as and when it’s needed.
Posted by Roger Neill at 08:44 No comments: